Our partners approached us with the project of their client — a European service that helps people plan vacations. Their website presents hotel offers aimed specifically at leisure, not business trips. In total, the client has four language versions of the site, which are located on different domains, but are connected to each other:

Our work was about an analytical system that worked with these four sites.

In addition, in the course of the work, the question arose as to what data the analytics and advertising services on the site will collect, depending on Consent Mode — that is, which cookies the user has allowed using, and whether he has allowed at all.

The second part was extremely important, because it related to GDPR regulations. Companies may be fined substantial amounts for violating this regulation. So, among other things, our testing was supposed to protect the client from such consequences.

Our partners created a large document for us with a list of all the variables and their possible values that we had to test and pass the result to the analysts. Thanks to this, analysts could understand the result and correct possible errors. We started by testing common variables and custom values. This process is quite monotonous, so we will not describe each variable, but will show the progress of the work on the example of a few indicative ones.

So, we choose a variable for the test and go to Google Tag Manager. There, in the container, we look for standard and special variables (below they are highlighted in red). These variables should be the same, as it is in the screenshot below. This means that everything is configured correctly and our partner’s analysts should have no doubts about the operation of this tag and variables.

In the same way, we tested and showed the transfer of the necessary tag properties. For example, let’s take the transaction tags in Google Ads. On the screenshot below, the necessary parameters of this tag are marked – there were no problems here either, everything was transmitted correctly.

The specificity of the test is similar. Certain user actions on the site trigger events, and information about these events is transmitted to the analytics system. In the case of GA3, events were transmitted via label. Let’s consider the Book button event as an example. In GTM it looks like this: 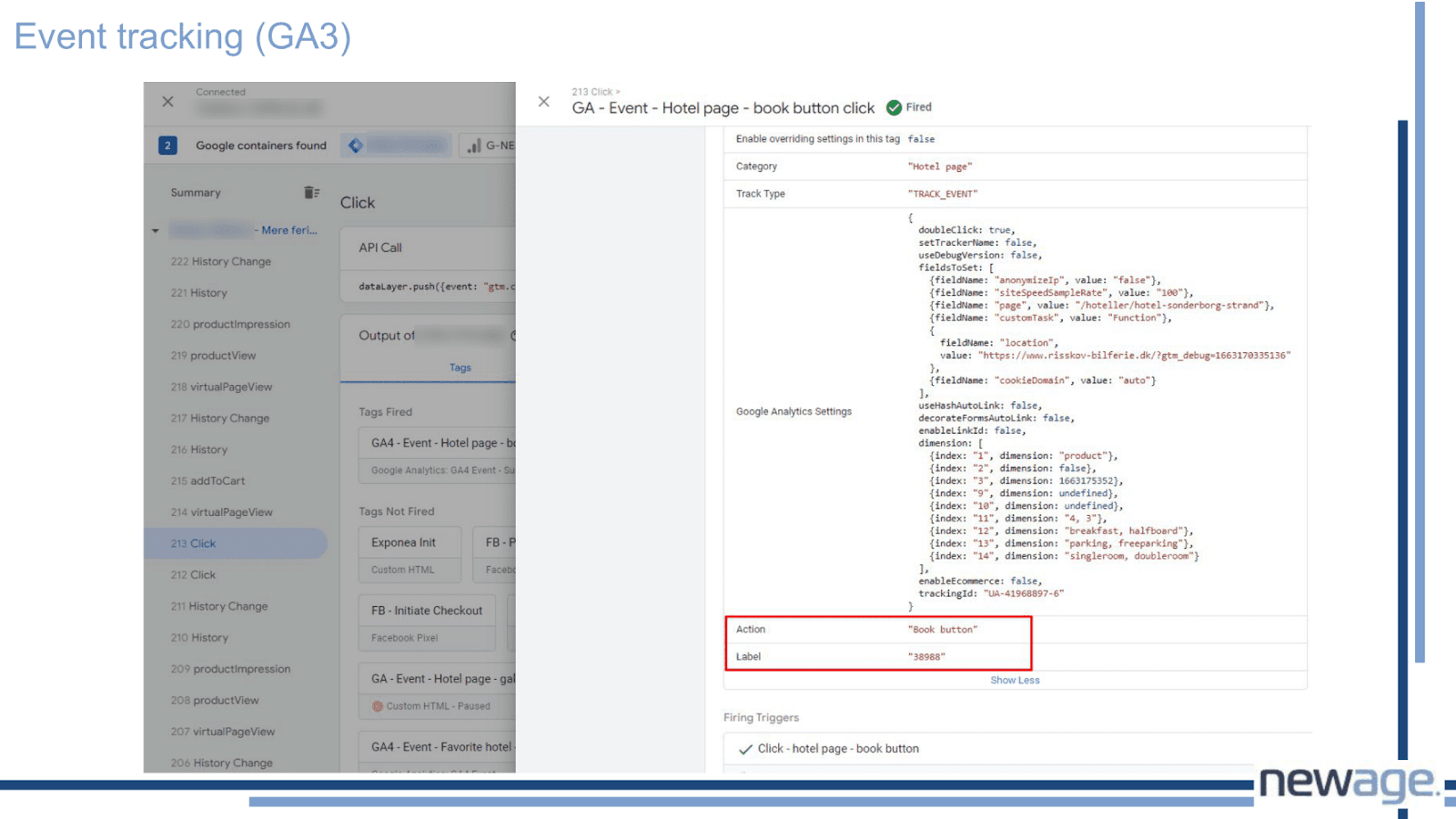 In the selected area, the event that took place on the site and the label that it is transmitted to analytics systems are indicated.

The same event before Google Analytics 4 had to pass more event parameters. 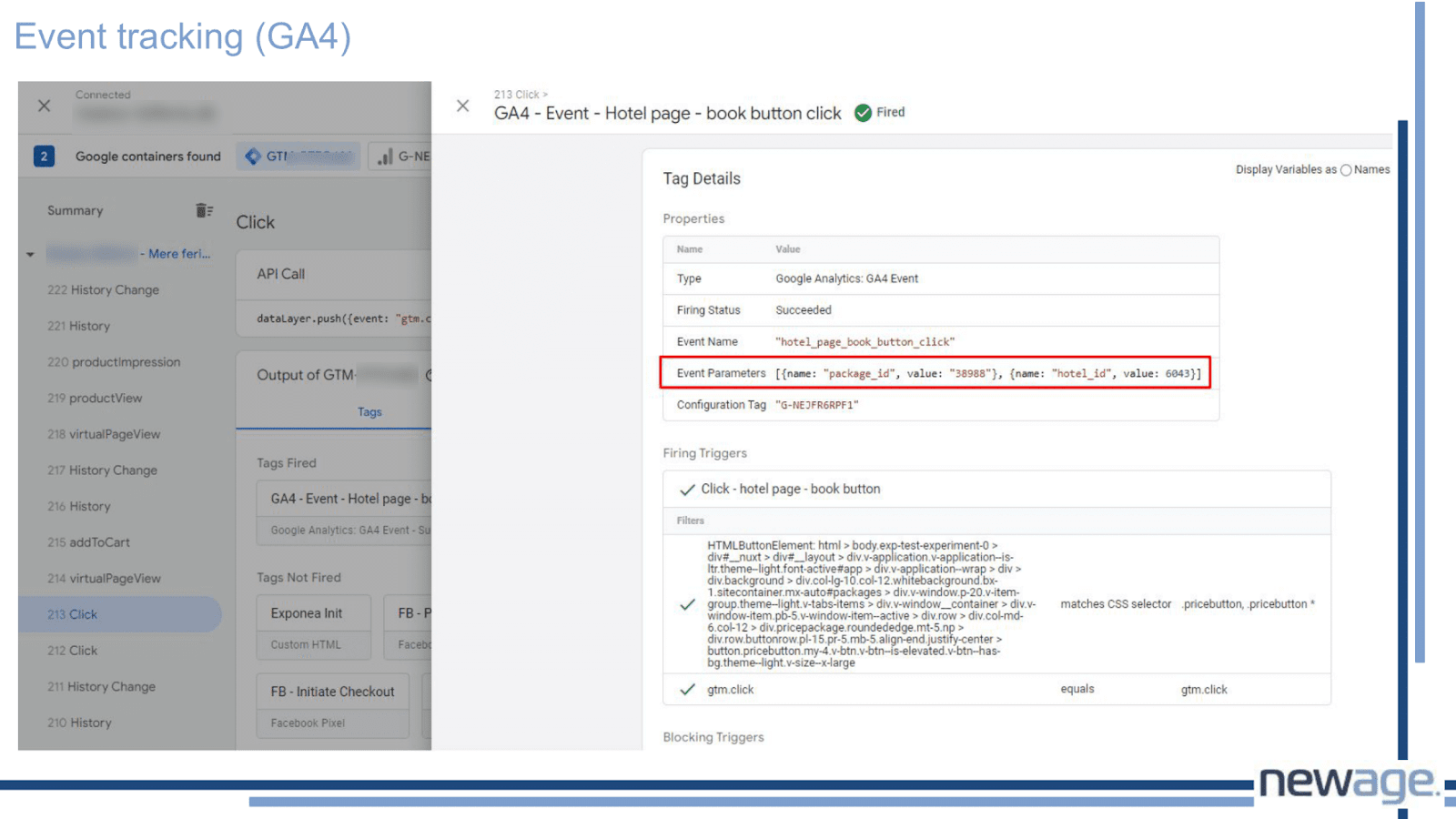 At this stage, we had to go through the entire funnel and capture the events from the main screen to the hotel reservation. The screenshot below shows only a small part of the events in the analytics that describe the booking process. These are two events on pages of the same type.

In total, there are 4 types of pages on the site, and seven events were tested for each type of page. Let’s consider the example of the “transaction” event. In GTM, we see the transmission through the standard parameters “name”, “id”, “price”, etc. The client also added custom parameters that also worked as they should.

In Google Analytics 4, the transaction had similar parameters. The main difference is the absence of custom variables, so as a result everything looks simple, concise and correct.

According to this choice, separate blocks of advertising and statistical tags were tested.

In general, the tests were successful, we were able to identify and communicate to the customer many major and minor errors, after which our partner’s specialists were able to fix everything.

Our partners created one universal container for Google Tag Manager that was ported from site to site with some changes after our test. Despite the fact that the sites were almost copies of each other, each had its own specifics and new errors appeared. But from fifty errors on the first site, we reached 10 non-critical errors on the last one.

Therefore, the customer received a finished product, thoroughly tested and with a minimum number of errors – the one that brings the most benefit.

It is a pleasure to work with newage. They are easy to communicate with, highly professional, and they are experts at website measurements.

In 2023, Google offers users three web analytics systems that allow them to explore user behavior on your site and

ASO Audit: Be Sure to Check These Fields

Using the example of an ASO audit for a fintech client, we tell you what to check in your apps on Google Play and the App Store

How to Advertise during Christmas: tips from Google, Meta, and Spotify

Marketers are always trying to find non-standard solutions, how to create a creative strategy, how to optimize a campaign so